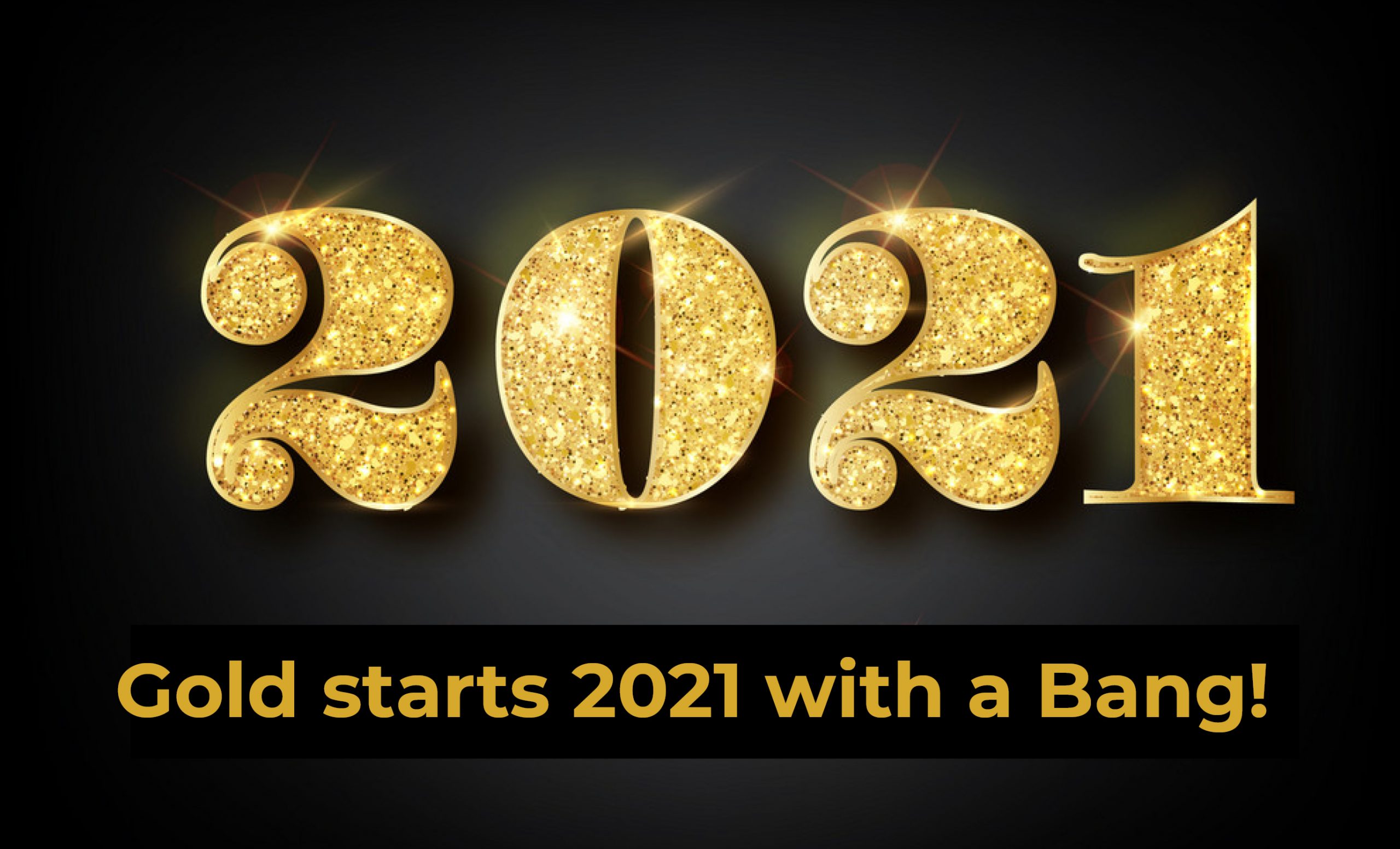 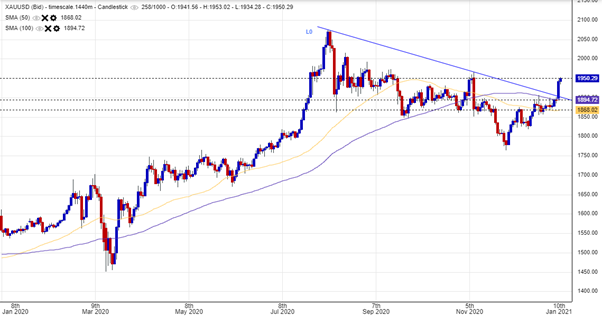 After putting in a significant low on the 30th of Nov 2020 at USD $1,765, investors were wondering how long the pullback and consolidation phase for gold would be before the next leg higher. December has been a seasonally weak month for previous metals over the past five years so it is interesting to see metals making a January recovery once again as we start 2021. One key indication that the current profit taking environment for gold is over, is the key breakout above the downtrend line off the recent highs. We can see in the chart above as soon as gold managed to clear the downtrend line from the August peak, the market experienced a spike of buyers stepping in with the price reacting quite quickly, sending gold to $1,950 once again. This clearing of the recent downtrend would give bulls confidence that the structural bull market is ready to continue and the weaker hands were likely knocked off during the November sell-off.

The fundamental news which helped gold break this key level included real rates in the US dropping as inflation expectations rose and Chicago Federal Reserve President Charles Evans saying the Fed should aim to let inflation run above a 2.5% target. This translates to low interest rate policy for a long time and potential expansion of the Feds asset purchasing program (or money printing if you will).

So more of the same, with the Fed claiming to desire higher inflation, all whilst printing new money to benefit the financial sector over the greater economy. Nothing new for 2021 when it comes to monetary policy then.

Precious metals for 2021 appear to be in a win-win scenario when it comes to inflation. If inflation by measure of the CPI remains low in the US, it will mean the Fed is encouraged to push rates as low as possible and continue to expand their balance sheet, which is supportive for gold prices. If the opposite happens and we see inflation start getting out of control, even though the Fed may taper, gold should still see inflows on inflation fears, so the metal should benefit regardless of what the CPI print is throughout the year. This could be the reason why many major investment banks have much higher forecasts for gold in 2021, such as Goldman Sachs which sees USD $2,300 as a target.

After putting in a significant low on the 30th of Nov 2020 at USD $1,765, investors were wondering how long the pullback and consolidation phase for gold would be before the next leg higher.

One of the major trends of 2020 was severe USD weakness. The US Dollar index fell from a high of 103 in March 2020 to 90 in December, over 12% lower. We saw a huge expansion of the money supply in the US in 2020 and odds are this trend of USD weakness is set to continue into 2021, as the index has failed to hold any key support levels thus far. The USD Index can be seen in the chart below and it looks like a falling knife scenario. 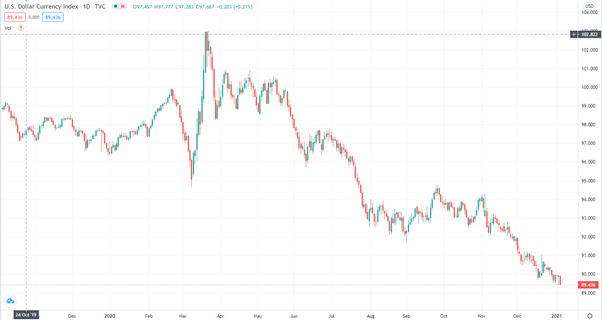 Further to USD weakness, if we continue to see an escalation of tensions between China and the US, we could see the Peoples Bank of China (PBOC) look to reduce its USD reserves in favour of gold. Something to follow closely in 2021, but they don’t make it easy as the PBOC gold holdings are usually shrouded in a bit of mystery. To follow central bank demand throughout 2021 you can find this info at the World Gold Council.

It’s not only gold and silver starting the year with a bang, as most punters would have seen bitcoin breaking out into new all-time highs. As soon as bitcoin broke through the key USD$21,000 mark it was a quick trip to $34,000 per coin with a parabolic spike largely driven by FOMO and potentially assisted by the infamous Tether printer. 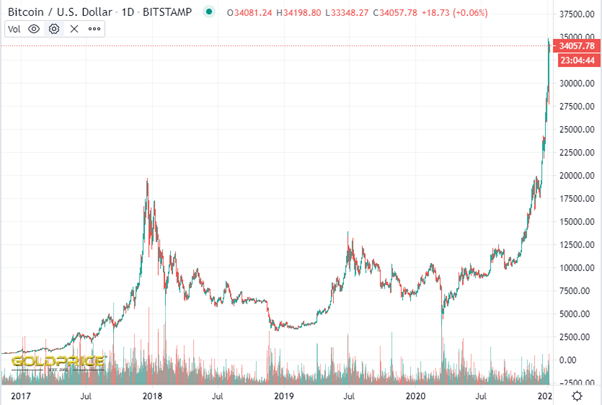 Something doesn’t sit right with this latest rally in bitcoin as it seems that far less people are involved in this rally than they were at the peak of 2017. Many are out there touting institutional demand as the main driver but given bitcoin has a market cap of $630 Billion currently, you would expect to hear about larger inflows from institutions than what we are hearing. We heard of Grayscales (the world’s largest crypto fund) record breaking $4 Billion of inflows into BTC in 2020, which is substantial, but only about 1/10th of the inflows that we saw move into Gold based ETF’s in 2020, which stood at close to $50 Billion. Parabolic moves in any asset class should be treated with caution so I would ignore any price targets being thrown out there by those that are long the market.

Another phenomenon in the crypto space is that of the Tether printer. Tether is a stable coin that represents the same value of 1 US dollar, but has raised many flags in the past with having a seemingly endless supply, and an ability of its creators to be able to print new Tether from thin air in order to buy Bitcoin. Any serious crypto investors should read through the history of Bitfinex and Tether as it could well be one of the major drivers of the recent rally.

In May of 2019 Tether themselves released an admission that the coin is only backed by 74% despite the previous claims of 100% backing with US Dollars. Surprisingly markets shrugged this off or didn’t read into it. But that would assume at least 26% of the Tether market cap was created from thin air with the most likely goal of pumping crypto prices higher or laundering newly created Tether through untraceable crypto wallets.

News around the NY Attorney Generals request for documents regarding Bitfinex and Tethers business relations is due on January 15th, and could affect the BTC price either way, so is something to watch closely in this space.

With talk of bitcoin being a competitor with gold, we think bitcoin and gold are entirely different asset classes and should be treated as such. We don’t think they should be seen as competitors in one’s portfolio. You can’t replace one with the other and think you have the same risk/reward profile. Gold has around 4,000 years longer a track record as a store of value and bitcoin’s relatively smaller market cap allows the potential for much larger speculative gains in a shorter time frame.

Regardless of your opinion on crypto currencies, one undeniable benefit is that they are leading to increased discussion in the broader public about the question: “what is money?” The more the masses learn about Central Banks and fiat currency the better, as it only leads to a higher likelihood of them diversifying wealth into more stable forms of money such as gold and silver.

If you want a risk/reward setup where you can gain or lose 50% of your investment within 6 months, choose bitcoin. If you prefer less volatility and better sleep at night, choose precious metals.

If you have any feedback or questions about this report, you can contact John Feeney direct at johnf@guardianvaults.com.au or on Twitter @JohnFeeney10

To find out more feel free to call through and speak to one of our representatives or email your questions to sydney@guardianvaults.com.au

Welcome to the Guardian Vaults Blog

Read the latest news in physical investment, storage and security.